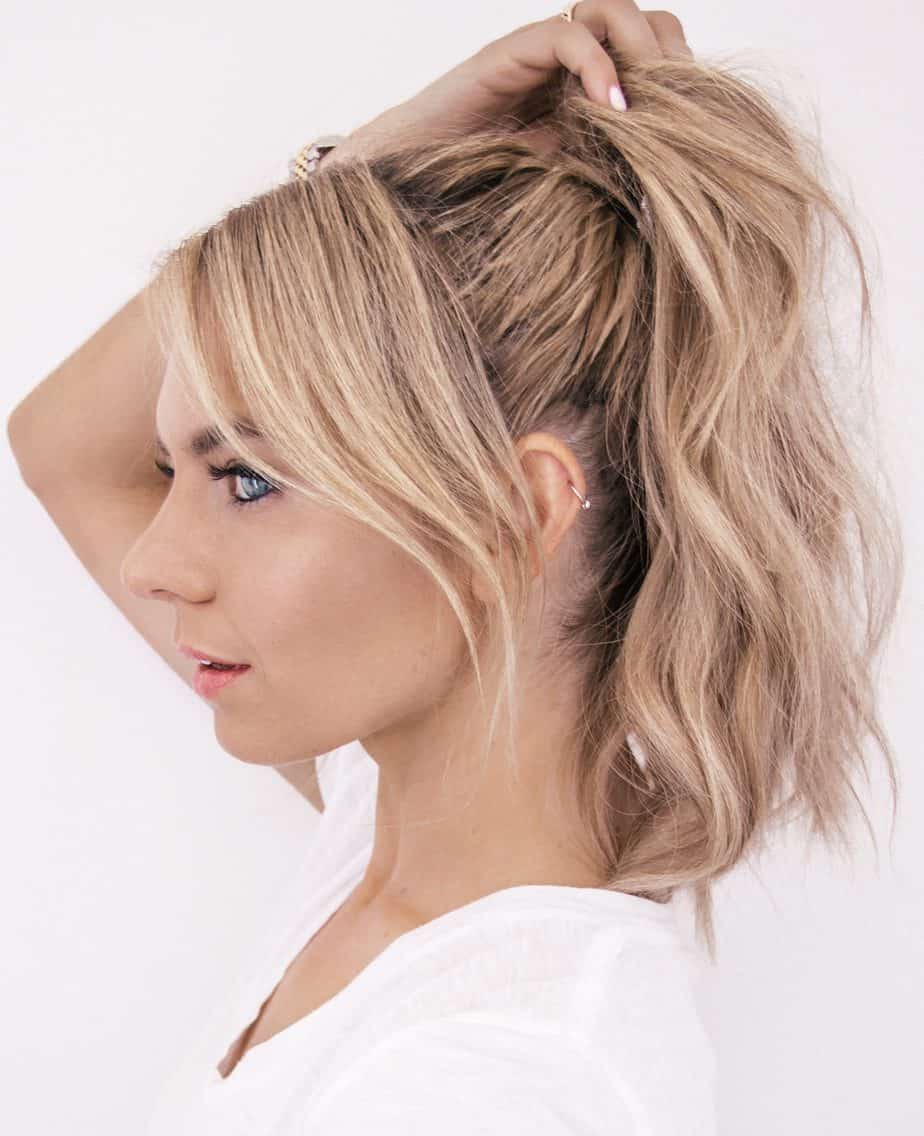 Several months ago I went to see my dermatologist Dr. Dendy Engelman (aka @drdendy) with a specific agenda: I needed to get rid of my hyperpigmentation and freckles. She recommended Fraxel—something I hadn’t even heard of—and I decided to have the treatment done. Below, you’ll find my full review of the Fraxel CO2 laser treatment, details about how much Fraxel costs, the downtime associated, and my honest opinion about whether or not I think it’s worthwhile.

[This article originally appeared on Spotlyte.]

Regrettably, in my teens, I spent a lot of time in the sun with little concern for the long-term effects and, as an adult, my complexion was paying the price.

While my freckles and hyperpigmentation might not be noticeable to most, they’re a constant source of concern for me. I often fantasize about being the kind of girl who just wears tinted moisturizer — or better yet, no face makeup at all — but in order to achieve a seemingly even complexion, I’m bound to foundation and concealer.

I also have the added pressure that comes with being an influencer — since I post a lot about beauty and skincare on my Instagram and blog, in some ways, I feel like it’s my “job” to stay up to date on the latest treatments that my followers might be curious about.

That’s what brought me into my dermatologist Dr. Dendy Engelman’s office several months ago to discuss options. I asked Dr. Engelman if there were any other products that I could be using, like a stronger vitamin C serum, or a serum with a higher dose of hydroquinone. Instead, she brought up a treatment: “Have you ever done Fraxel?” she asked me.

What is Fraxel and How Much Does it Cost?

“Fraxel is a fractional CO2 laser that creates microzones of injury in order to stimulate collagen and elastin, and help resurface the skin,” she explained. “It can be used to help treat acne scarring, sun damage, fine lines, and wrinkles, and [many people] can benefit from it.”

She noted that the only caveat is that those with deeper skin tones aren’t ideal candidates for Fraxel, because there’s a risk that it could cause hyperpigmentation. (Engelman adds that if you have a darker complexion, deep microneedling could be a fit for your needs.)

Prices can range from $100 for a small acne scar, to between $1,000 and $4,000 for a full face, depending on the type of laser used and how many sessions are required.

MORE: The Best Anti-Aging Serums According to Experts

After a week of doing my own research, I decided to make an appointment for the next month. But in the days leading up to my procedure, I really started to freak myself out: I spent hours searching the “#fraxel” hashtag on Instagram, watching videos of other women who’d recently undergone the treatment.

Here’s the before and after from my Fraxel laser treatment.

Everyone seemed mostly happy with their results; yet from what I saw in the photos, the healing process appeared to be long and painful. Some women even posted images of a disturbing, gridlike pattern that appeared on their cheeks the day after treatment.

According to Engelman, these marks are not unusual. (The criss-cross pattern marks the path of the laser beam that was used during the treatment.) Patients can also expect to experience burning, redness, swelling, tightness, itchiness, and peeling while the skin attempts to repair itself, and I was warned that I probably wouldn’t want to leave my house for at least a few days following the treatment.

“Fraxel Friday” has become something of a trend at dermatologists’ offices, because the bulk of patients like to have the weekend to recover. 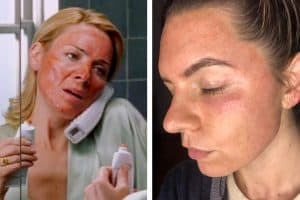 On my first day of recovering I felt like I was channeling Samantha Jones from Sex and the City.

Still, seeing the “after” photos — women with plump, glowing skin and significantly lightened sun spots — was enough to convince me that the treatment was worth trying. Even Dr. Engelman herself chronicled her own treatment on Instagram.

So I booked a Friday appointment, blocked off my weekend, and mentally prepared myself to hunker down for the next few days.

I was told to arrive about an hour in advance so that I’d have enough time to numb the area that would be treated. When I got to the office, a Physician Assistant took me into a treatment room and handed me a wipe to remove my makeup.

She then slathered a thick, Vaseline-like cream all over my skin that created a tingly sensation and, about an hour later, my entire face was numb.

Dr. Engelman came into the treatment room, turned on the laser, and got to work. I was slightly terrified because I wasn’t sure what the pain level would be, but considering how numb my face was, the stinging feeling from the laser wasn’t that uncomfortable.

I also barely had time to register any pain, anyway — the entire treatment took less than a minute. She then gave me ice packs to apply to my cheeks and forehead; and 15 minutes later, I was on my way home.

That afternoon and the day that followed, I felt like I had a terrible sunburn. I was instructed to keep my face hydrated with Aquaphor so I applied multiple layers throughout the day . . . but it seemed no matter how much I applied, my bone-dry skin would suck it up within hours.

Each evening, I’d rinse with a gentle cleanser, and again slather myself in Aquaphor before going to sleep.

Midway through my recovery process I experienced redness, itchiness, and dryness.

On the second night after my treatment, I woke up at 3 a.m. feeling like I was going to claw my face off. I was so itchy, as if dozens of ants had been crawling across my skin while I was sleeping. I hadn’t anticipated this sensation, so I simply took some Benadryl so I could get a few more hours of shuteye.

When I texted Dr. Engelman later that day, she recommended I take Allegra and apply a thin layer of hydrocortisone ointment, which delivered major relief. She also advised me to soak cotton pads in a solution of one tablespoon of white vinegar in a cup of water, then apply them to my face several times throughout the day.

This was not only to help accelerate the peeling process, but to alleviate the itching.

The next two days (three and four post-Fraxel) were spent tending to my brownish-red, scaly face. I was constantly switching from gentle cleanser to Aquaphor, to my vinegar soak, then back to Aquaphor, my antihistamine, then Aquaphor . . . you get the picture.

I felt like a slave to my skin, glancing in the mirror every hour to see if the peeling had begun. But finally, by the morning of the fourth day, I noticed a few small patches of fresh, virgin skin peeking through.

The dark, crusty layer slowly began to slough off in the form of tiny particles that almost resembled coffee grounds or black sand. Every few hours, my face started to look better and better.

By the fifth day, I woke up, glanced in the mirror, and looked like a new person, just like Dr. Engelman told me I would. I had a few areas that still had yet to peel — around my forehead and jawline — but for the most part, I was in the clear.

It was the first morning I felt comfortable enough to apply makeup (and a lot of SPF) and go about my regular day. 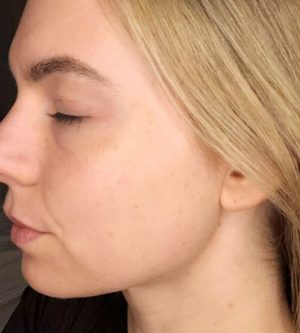 Fraxel After: noticeably lighter freckles and an overall smoother appearance.

Dr. Engelman also told me that it would continue to look better with time, and she was right. I am now officially two months in, and I could not be happier with the results. My sun spots, freckles, and hyperpigmentation are significantly lighter — and as an added bonus, my skin looks plumper, and my fine lines are less noticeable.

My complexion is by no means perfect, but I can’t imagine another treatment being able to achieve what Fraxel was able to do for me in such a short period of time. Plus, being able to share the entire journey with my followers on Instagram — makeup-free selfies and all — has been pretty liberating.

I loved being able to send the message that I, too, have insecurities just like everyone else — and reminding my audience that the “perfect” people you see on social media aren’t always as “perfect” as you might imagine them to be.

While I was red, itchy, and housebound during the healing process, I questioned whether or not the entire thing would be worth it. Going into hiding for five days is fairly inconvenient, and it also feels a bit extreme, considering my skin wasn’t that bad to begin with.

But now that I’m on the other side, I would do it again in a heartbeat. In fact, I would do it tomorrow if I could — but Dr. Engelman told me that for my skin concerns, I really only need it once a year. You better believe I’ll be counting down the days until then. 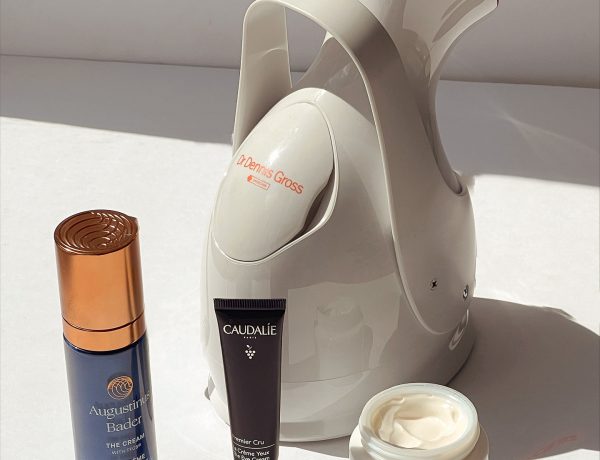 Best Luxury Skincare Brands and Products that Are Worth the Splurge Elemis Cleansing Balm Review: The Magical Makeup Remover that Doubles as a Mask 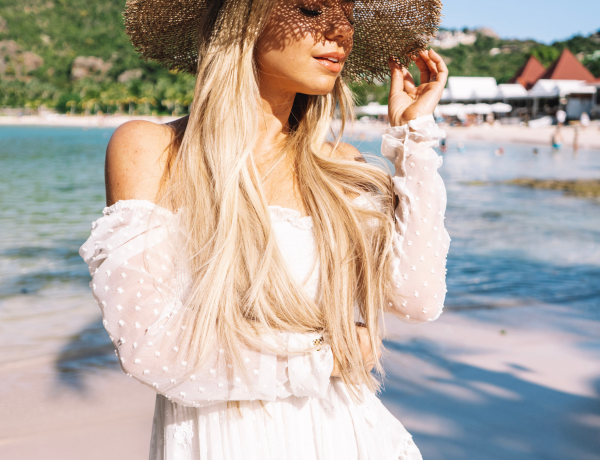 California Closets Review: The Cost, Before & After Photos, and How it Works

10 Style Essentials Every Man Needs (According to My Husband)